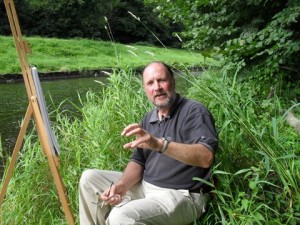 In the past two years, Peter has learned to uncover an aspect of his life which had remained hidden for too many years. Colour was cloaked in black and white. Now he is on journey to find a freedom that has opened up to him in the medium of oils and wonderful colour. Having worked in graphic arts for most of his life he is venturing now into the realms of free expression and learning to chill and be loose.

At the moment he is in the process of experimentation and delving into the possibilities that are within him. These pieces are the releasing of what was pent up and are the initial stages of his dream. This is just a beginning.