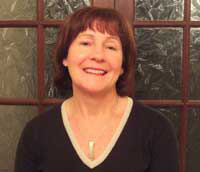 Dympna Mahoney has an interest in all aspects of the visual arts, including visiting exhibitions, attending lectures and art history. She began painting in 1984 and attended evening courses in Coolmine Community College.

Since then she has studied under Janet Minch and Prof Reginald Hobbs. Subsequently, Dympna studied at the National College of Art and Design under Ken Donfield, George Potter and Anne-Marie Keaveney. She has recently studied sculpture and bronze casting under the tutelage of Vivian Hansbury. In October 2003 Dympna was awarded the NUI certificate in Drawing and Visual Investigation at NCAD.

Her work covers a wide range of media including oil, watercolour, collage, pastels and bronze casting. Her work ranges from realism to abstraction.

2003
NUI certificate in Drawing and Visual Investigation at NCAD