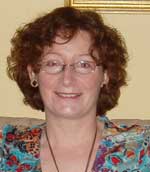 Born in Dublin, now living in Meath, Theresa’s work is influenced by her work as a Medical Scientist and process oriented psychology. She is interested in the creative process as an exploration of personal dynamics. Theresa is currently working on the themes of structure and absence of structure, erosion and loss of structure as well as the edge of materiality and immateriality. Her education includes FETAC V in Art and Design, 2004-5 with Betty Newman-Maguire; Core Year NCAD Art and Design, 2005-6; Painting Process, NCAD, 2006 with Diane Copperwhite; and Sculptural Process, NCAD, 2008, with Vivienne Hansbury.

Theresa designed the flyer and banner for the international workshop on conflict resolution – ‘Borders, Boundaries and Beyond’, held in Ireland in 2003.