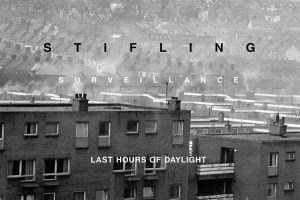 ‘We are all being watched through peep-holes, one-way mirrors, security cameras, talked about on walkie-talkies, car ‘phones, Pye pocketfones… Everyone is watching someone…’
Ciaran Carson (Belfast Confetti, 1989)

Since the beginning of the 20th-century surveillance and spying capacities have accelerated in line with technological advances. Now, at a time when the world is waking up to what is at stake, Surveillé·e·s investigate both the visible and invisible mechanisms in operation.

2018 marks twenty years since the signing of the Good Friday Peace Agreement, a momentous pact which paved the way for the ‘normalisation of security arrangements and practices’ in Northern Ireland. Centre Culturel Irlandais’ exhibition, Surveillé·e·s, finds its roots in the era and anxieties of the Northern Irish Troubles which serves as an important context for tackling contemporary concerns such as the pervasiveness of CCTV and online surveillance.

In partnership with Centre Culturel Irlandais